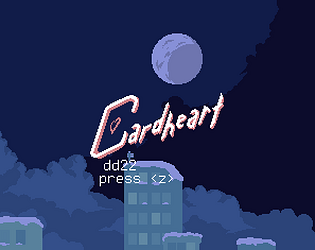 The gameplay is starting to shape up, though so far the combat is lacking, mostly due to the enemies not doing anything interesting. You can just hold down the fire card to deal with the whole bunch.

There seem to be some issues with chaining moves too fast  into each other, or holding multiple buttons. For example, using fire -> earth in a quick succession while standing in place results in a fireball followed by a punch animation without the huge stone fist appearing at all, while holding jump + earth results in a repeated pattern of empty punch -> small leap forward -> aerial earth attack. Also I feel like holding down attack buttons shouldn't prevent you from walljumping.

Doing a fully charged lightning move on a slope flings you up ridiculously high, that's probably something you should look into.

On a technical note, you should add some sort of (optional?) framerate limit. I noticed some coil whine from my GPU while playing as the game was running at roughly 1000 - 4000FPS depending on situation.

Thanks for playing! I've been aware of pretty much all your issues, and they should be addressed come next demo release. Though the lightning thing is actually intentional (probably shouldn't fling you up as high as it does now in any case)

Movement feels solid. Abilities are fun and  fluid to use. The animations that you have look cool. Try making the map more populated with those buildings and put some enemies at the top so I can run up the building and kick some nerds off. Awesome game. Definitely want to see more.

Thanks for playing, map will most certainly be more populated in the actual game.