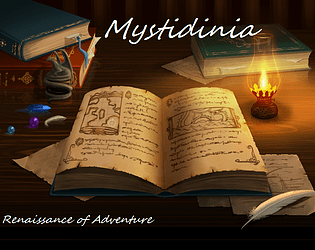 Though when playing I was stuck in the stats menu for a while, since i was unsure of what to do. I didn't realize i could close it using tab, you might want to make that clearer to the player.

Once i did get in the game the movement felt weird, and the rotation was very fast and caused me troubles controlling the character. Though once i got into a fight, the fight ended after a single attack, multiple times in a row, after which i got stuck, since i wasn't able to move over the water, or past the mushrooms, causing me to be stuck.

Good start! I feel like there's already a lot of game in there, but I couldn't get past the starting area. For some reason the arrow keys are SUPERFAST, like if I don't tap really quickly, I get turned around superfast, and with no automap I got confused where I was all the time. If that fast turning was fixed, I'm sure I would've enjoyed more of the game, I mean, who doesn't love a Dungeon Crawl?

Edit: Wait, there was a Dungeon Crawl on itch.io at nearly the same time. Is it possible you accidentally submitted here instead of there?

the fast turning is a symptom of a better computer, I made the game respond for people playing on a potato :) I may be able to tweak this somewhat though will have to test