Rally your people and make your tower reach the clouds
Submitted by Arnage, Anyaki, ZKShao, joelvneerbos — 1 minute, 17 seconds before the deadline
Add to collection 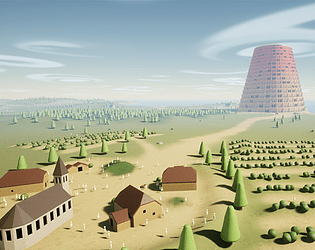 Team Name
The Bards of Babylon

Gameplay Instructions
Direct your citizens to build the world's highest tower, reaching beyond the clouds!

Pick up citizens and place them near trees or rocks to let them gather them.

Place your citizens near or on the tower to let them build.

Explore your island to find more citizens to recruit.

Enjoy the unique music all over the island played on various medieval instruments!

Grip button or right mouse button: pick up your citizens

Touchpad, thumbstick, A or X button: teleport in VR (depending on your VR system)

List any content that was created before the jam that was included in the final submission.
All visuals were custom except for a single texture from Quixel.

Some Blueprints were based on the First Person and Virtual Reality templates.

Really nice !! Love the idea, and well done :), would be grat to have the possibility to lower the sound.

A pretty fun and very well made jam. I love both the music and the visuals. I wish as a player I had a bit more to do. Overall is this a good jam game. Well done.

Very nice concept and art are very nice too