Back to RealityView game page 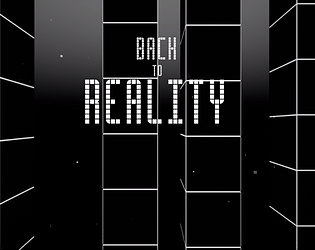 Back to Reality's itch.io page

List any content that was created before the jam that was included in the final submission.
Sounds, music, and font.

Your game was really cool with the FX! At one point I thought the music was going to start adding tracks sort of like a music game where you control the music. I figured out the controls after a few minutes of missing the boxes, then I was able to clear all of the boxes but then they just respawned. I tried clicking guide in the in game pause menu but that didn't work. After I saw the guide in the main menu I saw there were supposed to be enemies but I didn't come across any. Overall physics were really fun and kept me engaged just trying to clear the boxes.

Hey jgriffith! Thanks so much for playing my game. Unfortunately I simply ran out of time with this entry, and much of the game is half-baked.

Yeah, I had originally intended for the FX to come together in a way that makes dynamic music. I just couldn't get it right in time.

And level generation is endless. Size and difficulty scales with the level number. You'll be clearing tiles forever! Unfortunately, though, i didn't manage to add visual feedback for tile clear combos (they exist, it's just backend stuff) and upgrades (jump count, dash speed, etc.).  So... it's a pretty boring endless game right now.

The cybermen were supposed to be a bigger threat, too. Instead they just occassionally spawn on an open tile (the tiles with the pillar in the middle) and stand there, stomping the ground and slowly increasing the speed their tile moves. I didn't have time to properly implement AI (there were going to be three types of enemies, and a boss).

Again thanks for playing, and even more so for commenting. I worked hard to get something uploaded in time. Good to know that someone played it, at least!