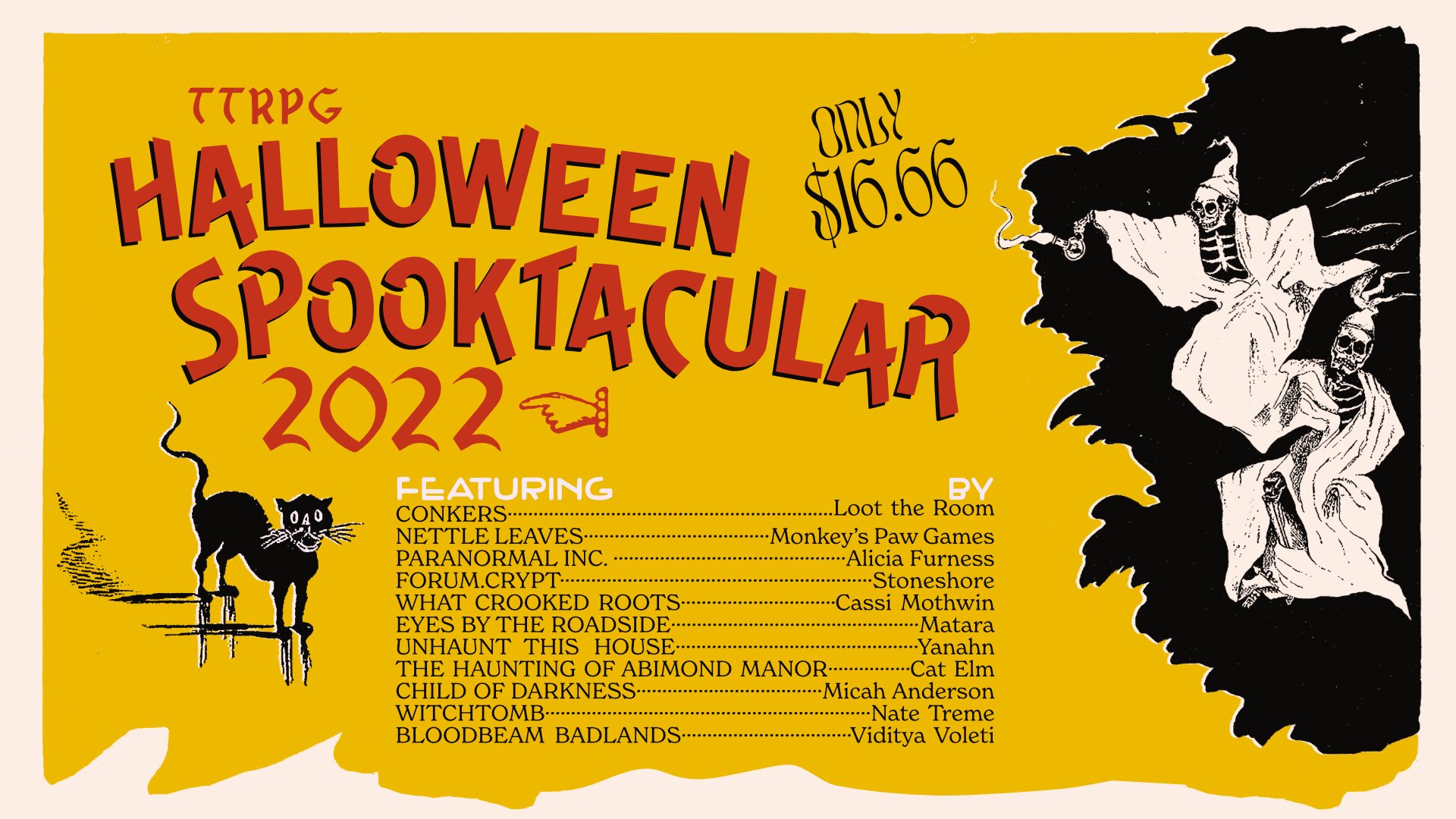 The words "TTRPG Halloween Spooktacular 2022" spill in red across a yellow background. On the right side of the page are two robed skeletons, and on the left is a yowling black cat. The names of the games in the bundle and contributors (listed on the bundle page) are given below. Image credit Micah Anderson.

Spooky season is finally here, and we have a phenomenal selection of TTRPG games and supplements for all your fright night gaming needs. From gunslinging vampires to paranormal investigators, and haunted houses to midwestern horror, this hand-picked bundle collects together 11 absolutely must-haves for your Halloween enjoyment this year.

Conkers by Loot the Room

The local name has too many vowels, feels alien on our tongues. We call it Hirwen. Every utterance marks us as outsider, foreign, not welcome.

It hugs the bottom of the valley, a tumour clinging to the earth. The stream that runs through it is low and almost dry, more mud than water. Hirwen prays for rain.

We pray for something else. Something much older.

Conkers is a small fiction for adventure games, an experiment in form from the creator of Treasures Of The Troll King and The Wretched.

NETTLE LEAVES is a funnel dungeon for old-school fantasy RPGs. It is best suited for 10-20 PCs of 0-level, and assumes rules where the PCs gain levels for treasure. The PCs have escaped a monstrous pursuer by fleeing into the briar patch; a realm of dream logic and supernatural mystery not wholly of this or any world

Paranormal Inc. is a gm-less game about paranormal investigation, struggling under capitalism, dealing with your own personal hauntings, and making peace between the living and the dead. Carved From Brindlewood, Paranormal Inc. brings card based prompt and story generation mechanics to Brindlewood Bay’s unique mystery mechanics.

A unique storytelling horror game, forum.crypt invites players to take the role of users on an internet forum in the early 2000s. Investigate mysteries and survive encounters with the otherworldly – but can you trust the other users around you? Part collaborative creepypasta, part survival horror, forum.crypt is GM-less, quick and easy to play, and perfect for a no-prep spooky one-shot.

What Crooked Roots by Cassi Mothwin

What Crooked Roots is a folk horror encounter supplement for 5e inspired by unsettling and insidious media like The Ritual, Over the Garden Wall, and The Wicker Man. Featuring woodblock themed artwork and a range of quick to deeper encounters, it's a supplement that aims to add terror to any party traveling through the woods.

Eyes By The Roadside by matara

Eyes by the Roadside is a tabletop role-playing game about Midwestern towns fraught with horrors both supernatural and all too common. As a group, you build a Midwestern community from the ground up, from its name to its history, and then fill it up with spooky folklore, mysteries, and rumors. Explore the Incident, survive the Threat, and save what you can of your small town life.

Gather a crew of off-beat spectre hunters and delve into distorted haunted buildings in Unhaunt This House - a game about resolving unfinished business while getting chased by ghosts. (Includes 3 mysteries, one of which is a haunted aquarium).

The Haunting of Abimond Manor by Cat Elm

The village of Wraicdale has been haunted by the crumbling spectre of Abimond Manor for almost a century; a hulking house on the outside of town, where locals know better than to tread. When villagers go missing at the manor, it's down to the players to find out what secrets lurk in its walls.

Explore a haunted manor in this system-neutral adventure for sword and sorcery games, with a time-limited final event for the players to contend with.

Child of Darkness by Micah Anderson

In a town not so far away, a child was born. A sweet little boy with perfect dimples and curly hair, and two little horns growing from his forehead.

Naturally, the Church can't stand for this, so you've been tasked with disposing of the child in some way that can't be traced back to them. They can't give you money (the paper trail, you understand,) but if some of their more unpopular relics went missing, no one would look for them.

Witchtomb is a small dungeon for old-school fantasy adventure games. It details the tomb of a powerful witch, and the creatures who have made their home inside.

Bloodbeam Badlands is a game about vampires stuck surviving a post-apocalyptic world where the sun never sets, what it means to keep moving when the deck is stacked against you, the immortal facing mortality with every step. It’s also a game about being really cool vampires with cool vampire powers and cool magic guns going on rad adventures in a rad world filled with rad things.